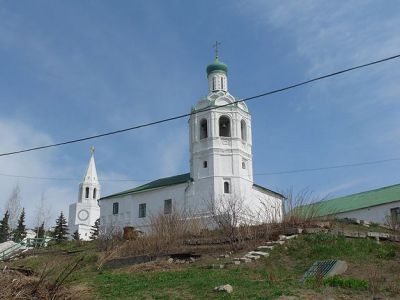 Dedicated to John the Baptist, this monastery housed the administration of the Kazan diocese from 1918 to 1922, after it had been expelled from the Kremlin. Following the arrest of Metropolitan Kirill in 1922, Renovationists occupied the monastery and used it as a strategic center. Closed in 1929, the cathedral was demolished and the appendant Vvedenskaia church and monks' lodgings were transformed into communal living space. Until the 1980s, more than 20 people lived in one accommodation unit under unbearable conditions, such as extreme cold and leaking roofs. The monastery has been reopened since 1992, the monks living there nowadays run a Sunday school and a library.
Image by Viktorianec on Wikimedia under Creative Commons License.