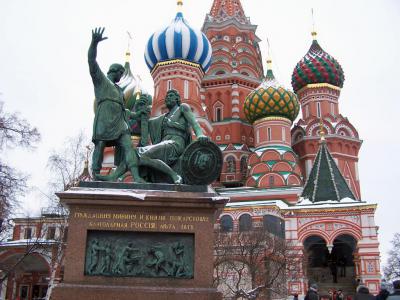 Monument to Minin and Pozharsky, Moscow

The Monument to Minin and Pozharsky is a bronze statue designed by Ivan Martos and located in front of Saint Basil's Cathedral. The sculpture commemorates Prince Dmitry Pozharsky and Kuzma Minin who gathered an all-Russian volunteer army to expel the forces of the Polish–Lithuanian Commonwealth from Moscow, thus putting an end to the Time of Troubles in 1612.

Casting of the monument – using 500 kilograms (1,100 lb) of copper – was carried out in 1816 in St Petersburg. The base, made of three massive blocks of granite from Finland, was also carved in St Petersburg. Moving the statue and the base to Moscow presented logistical challenges and was accomplished in winter by using the frozen waterways. However, in the wake of Napoleon's invasion of Russia, the monument could not be unveiled until 1818.

The front of the base carries a bronze plaque depicting a scene of patriotic citizens sacrificing their property for the benefit of the motherland. On the left is an image of the sculptor Martos giving away his two sons (one of whom was killed in 1813). As for the main heroes, Minin and Pozharsky, they are presented as ancient characters. The social inequality between the two is reflected by clothing. The nobleman Pozharsky (seated) is featured in a toga, while the commoner Minin (standing) is wearing a shirt and trousers.

Originally, the statue stood in the centre of Red Square, with Minin extending his hand towards the Kremlin. However, after the 1917 Revolution, the Communist authorities perceived the monument would obstruct parades on the square and even contemplated its demolition at some point. Fortunately, it didn't happen and in 1936 the statue was simply moved closer to the cathedral where it remains to the present day.
Image by vivali on Wikimedia under Creative Commons License.
Sight description based on wikipedia