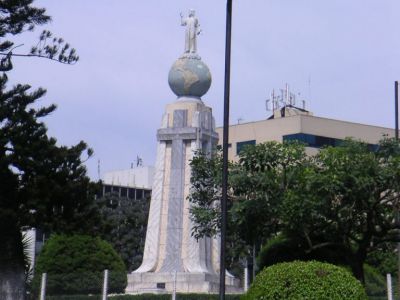 Monumento al Divino Salvador del Mundo is a monument located on Plaza El Salvador del Mundo. It consists of a statue of Jesus Christ standing a globe of planet earth, placed on top of the tall four-sided concrete base pedestal. An illustration of the monument is featured on the reverse of the 200 colón banknote and on the El Salvador license plate.

The monument was built on a pedestal originally used to decorate the tomb of Manuel Enrique Araujo, the President of El Salvador between 1911 and 1913. It was unveiled and presented by Araujo's family on November 26, 1942, in connection to the first National Eucharistic Congress in San Salvador.

It was heavily damaged in the 1986 San Salvador earthquake, but was rebuilt and put back in place months later. The plaza was remodeled and completed in 2010.
Image by Soman on Wikimedia under Creative Commons License.
Sight description based on wikipedia