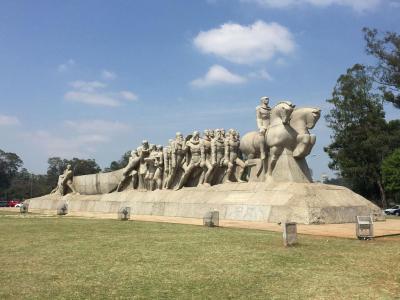 Monumento as Bandeiras (Monument to the Bandeiras), Sao Paulo

Monumento às Bandeiras – standing 12 meters high, 50 meters long and 15 meters wide – is one of the largest sculptures in the world and one of the most visited tourist landmarks in Sao Paulo. Located in Piazza Armando Salles de Oliveira at Ibirapuera Park, it was created by sculptor Victor Brecheret and installed on January 25, 1953. The monument was presented to the city of Sao Paulo on its 399th anniversary, and commemorates the Bandeirantes Paulistas expeditions, whose quests for gold in the 16th-18th centuries extended the boundaries of Sao Paulo.

The monument depicts an expedition, led by two horsemen, followed by a group of people of different ethnic backgrounds (Indians, Africans, Mestizos, and Portuguese), pulling a canoe that they used for traveling by river. It is said that Victor Brecheret had spent 30 years of his life creating this majestic piece of work.
Image by Murilo Richard on Wikimedia under Creative Commons License.
Sight description based on wikipedia