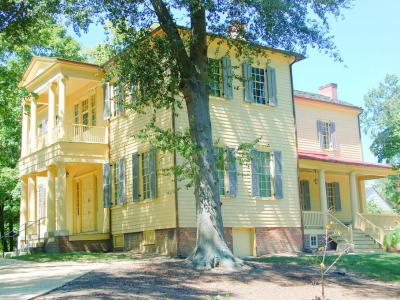 The Mordecai House, built in 1785, is a registered historical landmark and museum in Raleigh that is the centerpiece of Mordecai Historic Park, right outside the Historic Oakwood neighborhood. It is the oldest residence in Raleigh on its original foundation.The oldest portion of the house was built by Joel Lane for his son, Henry.

During the 19th and early 20th centuries, portions of land owned by the Mordecai family helped Raleigh's expansion as a city. In 1867, George Washington Mordecai donated land east of the city to establish a Confederate cemetery and another plot became Wake County's first Hebrew Cemetery. The adjacent Oakwood Cemetery, chartered in 1869, eventually lent its name to the large suburb that developed in the adjoining wooded land, earlier known as Mordecai Grove. In 1974, Oakwood became the first neighborhood in Raleigh to be listed in the National Register of Historic Places.

Property owned by the Mordecai family continued until 1967, when the house and its surrounding block were put on the market. Local preservationists protested and the city purchased the property, turning it over to the Raleigh Historic Sites Commission to supervise and develop as a historic park. Mordecai Square Historic Park is now managed by the City of Raleigh's Parks and Recreation Department. The Mordecai House is a designated Raleigh Historic Landmark.
Image Courtesy of Flickr and mul matsherm.
Sight description based on Wikipedia.