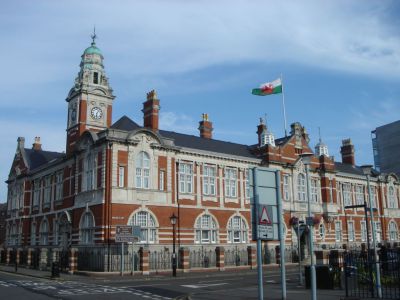 Describing itself as Swansea's only boutique hotel, the hotel is the only Welsh Tourist Board five star-rated hotel in Swansea, although it is only rated as four star by international standards.

The hotel occupies a Grade II listed building adjacent to the offices of the South Wales Evening Post in the Maritime Quarter, formerly used by Associated British Ports. An additional 21 rooms are located in a nearby Regency house.

Originally completed in 1903, the main hotel building was designed by architect Edwin Seward who submitted the winning design out of 100 entries. The original character of the building is still preserved after its conversion to a hotel. The decorative Baroque exterior is clad in red brick and white stone and topped by a Greek statue-clad clock cupola. The interior features stained glass with compasses, exploration and maritime themes. A mural depicting tall masted ships on the River Tawe, overlooked by Swansea Castle, decorates the boardroom.

Previous names for the building have included Associated British Ports Building and Swansea Harbour Trust Building, reflecting the names of the building's occupiers.

The hotel currently has 41 rooms (20 in the main building, while an extra 21 in the new morgans townhouse). The hotel group has another hotel - the Cawdor Arms in Llandeilo.
Image by John-rw on Wikimedia under Creative Commons License.
Sight description based on wikipedia