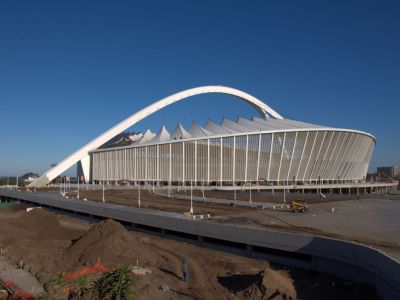 Somewhat reminiscent of the famous Wembley Stadium arch, a 350-metre (1,148 ft) long free and 105-metre (344 ft) high span arch holds up the roof of the stadium, the top of the arch rises to 106 metres (348 ft) above the pitch. The arch represents the once divided nation coming together, inspired by the South African Flag.
Image by Simisa on Wikimedia under Creative Commons License.
Sight description based on wikipedia

Want to visit this sight? Check out these Self-Guided Walking Tours in Durban. Alternatively, you can download the mobile app "GPSmyCity: Walks in 1K+ Cities" from iTunes App Store or Google Play. The app turns your mobile device to a personal tour guide and it works offline, so no data plan is needed when traveling abroad.

The Golden Mile is undoubtedly one of the most prominent tourist attractions in Durban. The wide stretch of beautiful beaches, separated by piers, offers a great opportunity for tourists to enjoy the warm waters of the Indian Ocean. The Golden Mile has always been a popular destination for both domestic and international travelers. Take the following self-guided tour to explore the best Golden...  view more