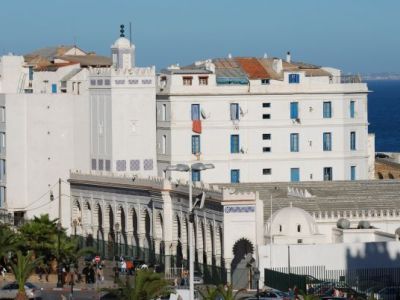 The Great Mosque of Algiers was built in 1097. It is also known by several other names such as Grand Mosque d'Alger, Djamaa al-Kebir , El Kebir Mosque and Jami Masjid. It is one of the few remaining examples of Almoravid architecture. It is the oldest mosque in Algiers and is said to be the oldest mosque in Algeria after Sidi Okba Mosque. It was built under sultan Ali ibn Yusuf. Its minaret dates from 1332 and was built by the Ziyyanid sultan of Tlemcen. The gallery at the outside of the mosque was built in 1840. The mosque has a rectangular courtyard of 38×46 meters on a 9×11 grid; this layout has been replicated in many religious structures. While the main mosque was built in 1097 AD, according to the minbar, the minaret on the north-western corner was a later addition, in 1332, by sultan Ali ibn Yusuf. The gallery surrounding the main mosque was added in 1840. Materials used in constructing the mosque were stone, brick, roofing tiles and wood, and ornamentation of ceramics and wood was applied.
Image by Zianide on Wikimedia under Creative Commons License.
Sight description based on wikipedia