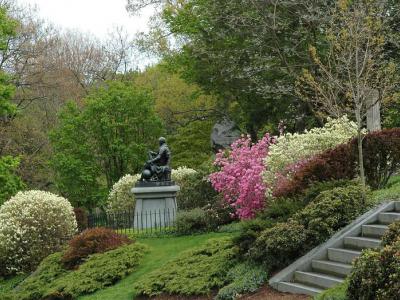 Mount Auburn Cemetery was founded in 1831 as "America's first garden cemetery", or the first "rural cemetery", with classical monuments set in a rolling landscaped terrain. An oasis from the storm of Crazy Intense Cambridge, Massachusetts, this 174-acre cemetery reminds of Pere Lachaise Cemetery in Paris, with notable celebrities buried here, and is important both for its historical aspects and its role as an arboretum.

The area is a favorite location for Cambridge bird-watchers and houses a collection of over 5,500 trees, including nearly 700 species and varieties. Thousands of very well-kept shrubs and herbaceous plants weave through the cemetery's hills, ponds, woodlands, and clearings. The cemetery contains more than 10 miles of roads and many paths. As a sign of respect for the buried, no running/jogging is allowed on the grounds, only walking.

Upon arrival, make sure to stop by the chapel (there are two historic chapels in the area worth visiting) and pick up a map, if you want to find some important graves – as this can be difficult sometimes, because the markings are not distinct. Also, there are audio tapes available for self tours. At the end, you might want to climb to the top of the Tower and have a 360° look of the surroundings.
Image by Friends of Mount Auburn on Flickr under Creative Commons License.
Sight description based on wikipedia