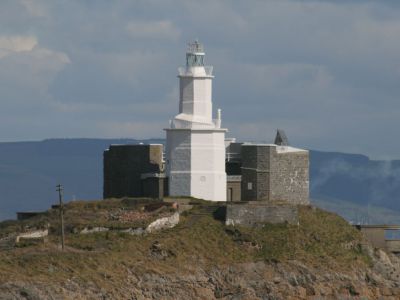 Mumbles Lighthouse (completed in 1794) is a lighthouse, which sits on the outer of two islands off Mumbles Head, is clearly visible from any point along the five mile sweep of Swansea Bay. Along with the nearby lifeboat station, it is the most photographed landmark in the village.

In 1860, the oil powered light was upgraded to a dioptric light and the fort that surrounds the tower was built by the War Department. In 1905, an occulting mechanism, where the light was made to flash, was fitted. This was partially automated in 1934. By 1977, the cast iron lantern had deteriorated beyond repair and was removed. A different lantern was added in 1987. In 1995, the main light was replaced and an array of solar panels and emergency monitoring equipment were added.
Image by Lilo Lil on Wikimedia under Creative Commons License.
Sight description based on wikipedia