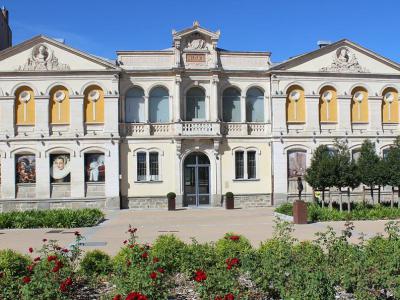 The Fine Arts Museum can be found in the Bastide Saint-Louis section of the city of Carcassonne. The museum was founded in 1836 in the old presidial court of the city. The impetus for the museum was provided by a group describing themselves as "passionate about art, history and archeology." The facade was restored completely in 1900.

The collection of art housed by the museum is vast. There are 102 paintings from Society of Arts and Sciences (1845), donations from the State, private donors, and the Regional Museum Acquisition Fund. It also has a respectable archeological collection controlled by the Center for National Monuments.

It holds temporary exhibitions annually in cooperation with other museums and some galleries. There are around ten conferences on art history each year and student workshops at all levels up to university.

The museum consists of eleven rooms showing art by respective period. Rooms one, two and three contain French, Italian and Austrian paintings of the sixteenth through the early nineteenth centuries. Rooms four, five and six hold the Napoleonic era art and art of the French and English schools and ceramics.

Dutch and Flemish schools and neo-impressionism are found in rooms seven and eight. Rooms nine and ten are of the twentieth and twenty-first centuries. They cover the era between the world wars and the School of Paris. Room eleven holds some temporary exhibitions.
Image Courtesy of Wikimedia and Martinvl.