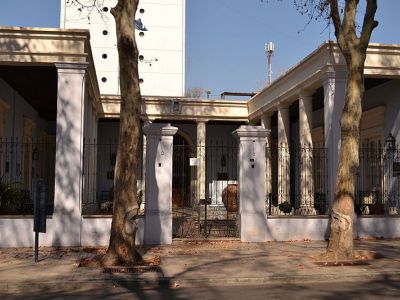 Museum of the Cuyo's Past, Mendoza (must see)

Established in 1967, Museum of the Cuyo's Past gives a deep insight into the lifestyle and roots of the Cuyo region inhabitants. The museum mainly concentrates on the 19th century period. It occupies 16 rooms and 4 courtyards. The exhibition consists of furniture, pictorial works, documents, household objects, creating the atmosphere of the time and taking the visitors back to the 19th century. Each of the rooms has its own theme and focuses on a specific part of life, we have an archeological room, religious room, weapons’ room, room of oil in Mendoza, room dedicated to the Unitarian and Federal ideas, Independence room, the civil governor room, and, the most popular one, room dedicated to Liberator General don José de San Martín. Along with the exhibited items and showpieces, the museum houses a library of more that 5,000 volumes, as well as newspapers and documents recording facts from Mendoza's history.
Image by Sefer on Wikimedia under Creative Commons License.