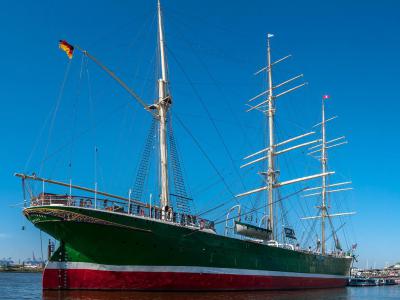 The Rickmer Rickmers is a three masted sailing ship, moored in Hamburg’s Landungsbrücken docks, which now houses a museum. It lies close to another ‘museum ship’, the Cap San Diego. The ship got her unusual name from Rickmer Clasen Rickmers, a shipbuilder from Bremerhaven whose shipyard built her in 1896. She travelled to Hong Kong and Chile on trade routes, bringing back rice and bamboo, amongst other exotic products. Captured by Portugal in World War I, the ship has sailed under the flags of Portugal and the United Kingdom, and even won the Tall Ships’ Race in 1958, when it was known as the Sagres.

Returned to Germany in 1983, it took four years and several thousand Deutschmarks in charitable donations before the ship was restored to its former glory. It opened as a museum and restaurant in 1987. The museum is housed on the lower deck, which traces the history of the ship, and provides visitors with exhibits on merchant sailing at the turn of the 20th century. The restaurant fills the entire upper deck, offering views across the River Elbe towards the docklands area. The Rickmer Rickmers museum ship is open each day from 10am until 6pm. Entrance is 3 Euros for adults, 2.50 concessions.