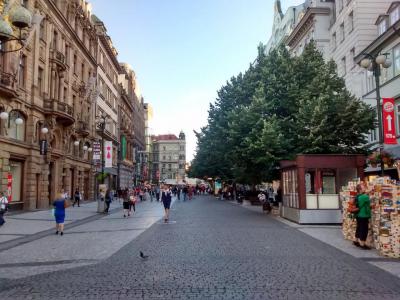 Na Příkopě (literally "On the moat"), commonly known also as Na Příkopech or Příkopy, is a street in the heart of Prague, connecting Wenceslas Square to Republic Square, and separating the Old Town from the New.

Founded in the 14th century, the street sits on the site of the former 10-meter-wide, 8-meter-deep moat, dated from 1234, which led along the medieval walls of the Old Town. The moat was filled with water flowing directly from the Vltava river and thus made the Old Town a closed island. The moat was covered in 1760, upon which chestnut trees were planted and the emerged street was named Ve starých alejích (“In old alleys”). In 1845-70 it was renamed Kolowratská třída and since 1871 has been known as Na Příkopě.

Because it was one of the few reasonably wide streets in Prague, it soon became a traffic artery. As of 1875, the city's first line of horse-drawn tram had run here, electrified in 1899. In 1919, Můstek became the first intersection in Prague to be controlled by a traffic policeman. In 1927, it gave way to the light signaling, making it the city's second electrically-regulated road crossing.

In the 1960s, traffic jams were getting worse. However, in 1978 the metro station was opened at Můstek, and Line B followed the street since 1985 for almost its entire length to the Republic Square. The nearly century-old tram line was terminated in 1985 and the bustling urban street became a pedestrian zone – a major business quarter and promenade lined with many new stores.

Home to some of the most expensive residential and commercial property in Prague, it has among its residents the imposing headquarters of the Czech National Bank, historic palaces, cafés, and luxury shops, such as Černá Růže, Myslbek, and Slovanský dům.
Image by Mx. Granger on Wikimedia under Creative Commons License.
Sight description based on wikipedia