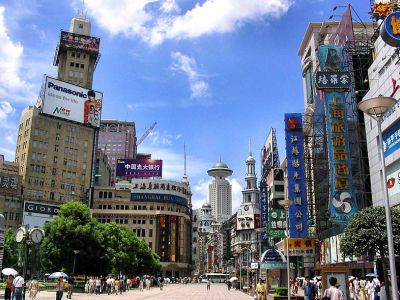 Nanjing Road has been traditionally Shanghai’s premier shopping destination, replete with all kinds of stores, drawing daily over one million visitors. The street is split into two distinct halves – the East Road and West Road. Together, the two measure almost 10 km (6 miles), making it the world’s longest and busiest pedestrian thoroughfare.

Nanjing East Road has been the “shopper’s paradise” since before the 1950s. Its main highlight is Shanghai No. 1 Department Store renowned for its exotic window displays. Some say, it's good for a look but not so much for bargains.

After sunset, Nanjing East Road is particularly fun to be in, as the line-up of malls try to grab shoppers' attention with the intricate lighting and countless advertising screens, proliferated here as if electricity bills are no object whatsoever.

Some of the buildings here stand more than one hundred years and represent a rare blend of Eastern and Western architectural styles, whose collision first peaked here in the 1930s rendering Shanghai the foremost trade agent between the two civilizations. The newer malls reflect the side of modern China with its millennials in hot pursuit of luxury.

Unlike the other parts of Shanghai, you won't see any stalls or street markets in Nanjing. Pretty much everything here is big, even Starbucks. The Starbucks Reserve Roastery, the world’s largest outlet, covers three floors and serves up to 7,000 customers per day, seating up to 1,000 at a time!!!

Tip:
For the ease of travel, there are mini-trains running up and down half the length of Nanjing Road during day hours – convenient for those wanting to see the area, especially if tired of walking or with kids in tow.
On a foodie note, try the food court in the New World City Plaza. Huge, pretty, clean, numerous stores, good prices. And the LEGO shop on its ground floor is a haven for LEGO lovers.
Image Courtesy of Wikimedia and Agnieszka Bojczuk.
Sight description based on Wikipedia.