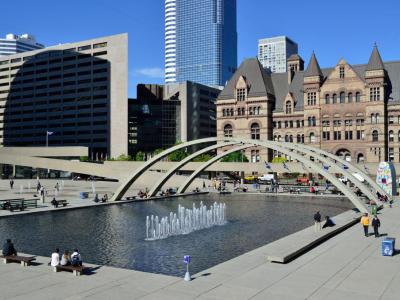 Nathan Phillips Square is an urban plaza that forms the forecourt to Toronto City Hall, aka New City Hall, at the intersection of Queen Street West and Bay Street. The square is named for Nathan Phillips, mayor of Toronto from 1955 to 1962, and was designed by the City Hall's architect Viljo Revell in collaboration with landscape architect Richard Strong. The square was opened in 1965.

Today it serves as the regular site of various public events such as art exhibits, concerts, rallies, a weekly farmers' market and other ceremonies. Annual events include a New Year's Eve Party and the Cavalcade of Lights Festival lighting of the official Christmas tree. The annual Nuit Blanche art festival sets up art exhibits in the square, and has also utilized the parking garage located underneath the square. During the winter months, the reflecting pool is also converted into an ice rink for skating.