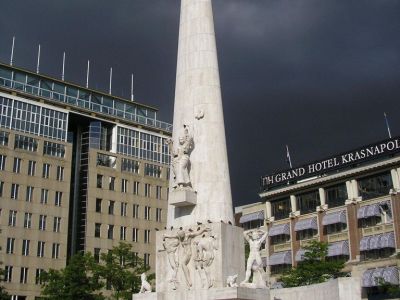 Designed by the famous Dutch architect Jacobus Oud, the Dutch National Monument stands as a memorial to the Second World War. A national icon in Amsterdam, the obelisk is a place famous amongst both locals as well as tourists who visit the city.

Although the structure is popular amongst visitors, very few actually appreciate the underlying symbolism that is crafted on the pillar. Placed in a series of concentric circles, the obelisk is beautifully sculpted with figures of men, canines and birds. The front side of the monument has two male figures that represent the Dutch Resistance Movement while the left and right sides represent the intellectuals and the working class. The canines stand as a symbol of loyalty and suffering. The woman along with the child represents victory, peace and new beginnings, and the doves that ascend to the skies symbolize freedom and liberation.

The urns behind the obelisk hold the soil that was collected from the World War II cemeteries and execution grounds.

Every year, on the 4th of May, the ceremony of Remembrance of the Dead is held at the National monument. The obelisk stands as a representation of all the turmoil, suffering and lives that were lost and sacrificed during the Second World War.

Why You Should Visit:
One of the most important European symbols that recall the immense tragedy of the Second World War.

Tip:
A nice place to make a brief stop along the way to other exhibits within the area.
Image by Phyzome on Wikimedia under Creative Commons License.