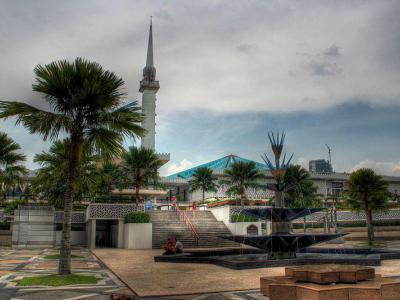 Kuala Lumpur is a rich blend of culture, heritage and modernization where each building and structure has a fascinating past and a story for everyone to hear. Such is the case with the striking National Mosque of Malaysia, where non-Muslims are welcome to visit outside of prayer time.

The National Mosque of Malaysia is one of the most prominent buildings in the skyline of Kuala Lumpur. Covering a massive area of over 13 acres, this post-independence structure has the capacity of seating almost 15,000 people, thus, making it one of the largest mosques in South East Asia.

The Mosque was one of the first few structures that were built post the Malay independence and was meant to honor the Malaysian freedom from the British rule. It was built on the sight of a previously erected Gospel Hall which was later seized by the Malay Government.

The National Mosque of Malaysia was completed in 1965 by a team of three talented architects: UK-based architect Howard Ashley, and Malaysian origin, Hisham Albakri and Baharuddin Kassim. Although the structure was religious in origin, the design and style of the building were intelligently ahead of its time. One of the most striking features of the mosque is the umbrella roof which according to some, symbolizes protection and shelter while architecturally is a clever solution to achieving a greater coverage over a large area.

Why You Should Visit:
The elegance of the mosque is in its towering white minaret, the use of water and the wonderful geometric patterning of its outer courtyards.

Tip:
Be sure to go to the visitor's entrance if you aren't there to pray. There are robes for visitors to borrow free of charge if they don't meet the dress code. There also are benches to wait on outside the entrance if you arrive early, and helpfully, free WiFi too (and a little shop for refreshments). Great to combine a visit with the Islamic Arts Museum just around the corner.