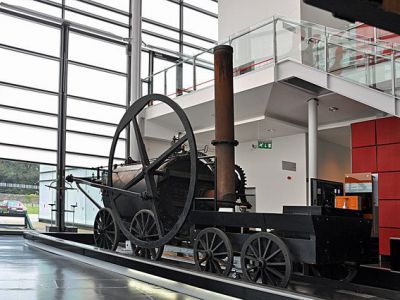 The National Waterfront Museum or NWMS is a museum forming part of the National Museum Wales. It is an Anchor Point of ERIH, The European Route of Industrial Heritage.

Consisting of a major new slate and glass building integrated with an existing Grade II listed warehouse (formerly the Swansea Industrial and Maritime Museum), the new museum deals with Wales' history of industrial revolution and innovation by combining significant historical artifacts with modern technologies, such as interactive touchscreens and multimedia presentation systems. Building and exhibition design was carried out by Wilkinson Eyre and Land Design Studio respectively, and Davis Langdon was project manager for the construction.

Much effort has been put into accessibility for the new museum, and is one of the first museums in the United Kingdom to feature multilingual voiceovers, as well as British Sign Language captioning on all interactive content.

The museum, which secured funding from the Welsh Development Agency and the Heritage Lottery Fund (among others) was opened in October 2005.

The collections on display include maritime, transport, technology and retail artefacts.

Want to visit this sight? Check out these Self-Guided Walking Tours in Swansea. Alternatively, you can download the mobile app "GPSmyCity: Walks in 1K+ Cities" from iTunes App Store or Google Play. The app turns your mobile device to a personal tour guide and it works offline, so no data plan is needed when traveling abroad.