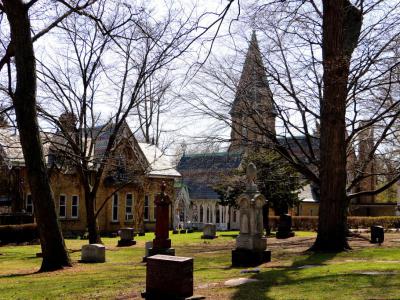 Open since 1850, Toronto’s Necropolis has been the resting place for some of the most renowned and historically important people of Canada. Among them are William Lyon Mackenzie, the first mayor of Toronto, George Brown, the founder of The Globe and the Mail, Joseph Burr Tyrrell, noted geologist and mining consultant (the man who discovered that dinosaurs roamed in Alberta's Badlands), and Ralph Day, Toronto’s Mayor between 1938 and 1940.

Over the years, this quiet, serene and picturesque graveyard has served as the final abode to over 50,000 people. Apart from being the oldest cemetery in the city, the Necropolis is also one of Toronto’s historically significant sights. Entering it instantly transports the visitor to the early 19th century. The area boasts of some of the city’s oldest buildings. A brilliant landscape of greenery, with a sprinkle of antique architecture, the Necropolis portrays some of the finest high Victorian Gothic-styled structures that are well maintained.

The collection of monuments and sculptures found inside the Necropolis contributes to its reputation of being one of the most beautiful resting places in Toronto.
Image by Rina Pitucci on Flickr under Creative Commons License.