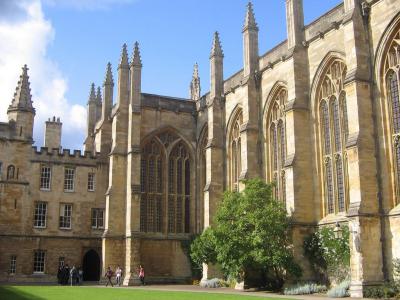 New College is one of the constituent colleges of the University of Oxford. Founded in 1379 by William of Wykeham, the full name of the college is St Mary's College of Winchester in Oxford. The name "New College", however, soon came to be used, following its completion in 1386, to distinguish it from the older existing college of St Mary, now known as Oriel College.

In 2017, the college ranked first in the Norrington Table, the one assessing relative performance of Oxford's undergraduates in final examinations. Historically, it has been ranked highly and had the 3rd highest average Norrington Table ranking over the previous decade.

The college is also one of the main choral foundations of the University of Oxford. Its choir is regarded to be one of the leading choirs of the world, and has recorded over one hundred albums so far, for which it has been awarded two Gramophone Awards.

Like many of Oxford's colleges, the New College admitted its first mixed-sex cohort in 1979, after six centuries as an institution strictly for men.

***Harry Potter Walk***
The New College Cloisters appear in Harry Potter and the Goblet of Fire a good number of times – many of the corridor scenes within the film are shot here, including that in which Harry has to push through all the Gryffyndor students wearing Potter stinks badges to go and have a word with Cedric.

The New College Courtyard also served as a filming location for Harry Potter and the Goblet of Fire – the scene in which Harry tips off Cedric about the dragons which they will be battling in the first of the trials in the Triwizard Tournament. In the same movie, Harry comes face to face with Malfoy, who is sitting on a gigantic oak tree and where he is then turned into a ferret by Mad-Eye Moody. This particular tree is found in the New College Cloisters.

If you come to explore all things Harry Potter at Oxford during the colder period (October through March), then the entry to New College is free. However, if you go during the warmer months (March to October), you will need to buy a ticket.
Image by Olaf Davis on Wikimedia under Creative Commons License.
Sight description based on wikipedia