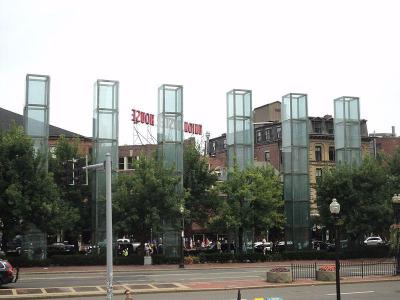 There are also random messages on the towers. Underneath the towers, steam rises up through metal grates from a dark floor with twinkling lights on it. Each tower symbolizes a different major concentration camp (Majdanek, Chełmno, Sobibor, Treblinka, Bełżec, and Auschwitz-Birkenau), but can also be taken for menorah candles, the six million killed, and the six years that the mass extermination took place throughout 1939-1945. The New England Holocaust Memorial is located near the Freedom Trail, and is only a few steps off the trail, making it a popular tourist attraction.

Why You Should Visit:
Some Holocaust memorials are very evocative while some are not. This one in Boston is excellent.
It's a really nice spot near the North End and Haymarket and they have done well at building something memorable and powerful.

Tip:
Walk slowly through it and try to read as much as you can allow yourself. Do not walk around this – it needs to be walked through.