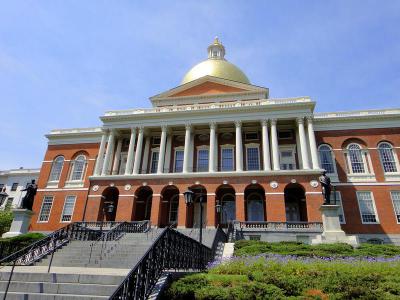 Standing atop Beacon Hill in Boston is the New Massachusetts State House, seat of the government of the Commonwealth of Massachusetts, the Massachusetts General Court and the offices of the State Governor. A wooden cod hanging on the wall inside the House of Republican chambers is called the “Sacred Cod” and represents the importance of fishing industry for Massachusetts.

The State House was built in 1798 to the design by Charles Bulfinch inspired by two buildings in London: Somerset House and the Pantheon. The magnificent dome was once covered in wood shingles, but it leaked, so they gave it a copper sheath and then covered with 23k gold-leaf. During WWII the dome was painted black to prevent its showing up in case of air-raids, and it cost the state a fortune to restore the original gold-leaf after the war. On top of the dome is a wooden pinecone to represent the importance of the logging industry. Found outside are several statues, including an equestrian statue of General Joseph Hooker; the statesman Daniel Webster; Horace Mann, considered to be father of the “normal school” movement; J.F. Kennedy; Anne Hutchinson, a staunch advocate of religious freedom and rights for women; and Mary Dyer, one of the Boston Martyrs who was hanged for being a Quaker in spite of a Puritan law forbidding Quakers in the city.

Why You Should Visit:
The building is open to the public free of charge, though you'll need to pass through security first.
To see the (many) grand halls and chambers where the legislators convene to debate & pass laws.
Magnificent architecture and artwork – large rotundas, grand staircases, marble sculptures and massive paintings.

Tip:
If you come at the right time, you can have a guided tour through the building.
A self-guided tour is fine too, as there are pamphlets which explain the significance of the various rooms and monuments.