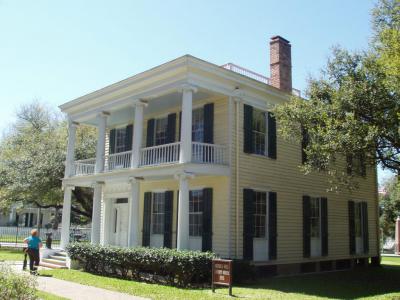 Visitors to the Sam Houston Park will see the house of a wealthy Houston family in the 1850s – that decade prior to the Civil War when the city was becoming a regional center for the shipping of cotton by rail and water.

The first occupants of the two-story Greek Revival structure were the family of Ebeneezer B. Nichols, a retail merchant and shipper who oversaw construction of high quality, including white pine and hardwoods brought in from the north-east on his own ships. Nichols did not live long in his new residence, however, moving away by 1856. He sold Massachusetts-born William M. Rice his share of the business, along with the house as well. Both families were served by slaves, who almost certainly lived in an outbuilding above or near a detached kitchen in the back garden.

Rice vacated the house in 1863, following the death of his wife and the effect of the Union naval blockade on his business. After three decades of use primarily as a boarding or rental property, the building was in danger of demolition, until Emma R. Cherry – a talented local artist – came to its rescue. Not only did she convince her husband to purchase the house, but also had it moved from its original location. Today, it is one of the most recognizable buildings in Sam Houston Park.
Image by little black spot on the sun today on Wikimedia under Creative Commons License.