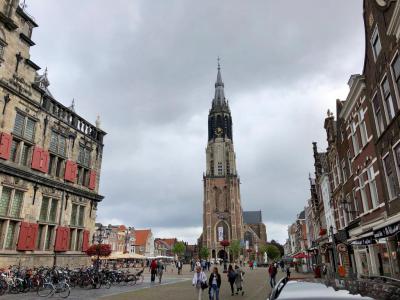 The New Church came after the Old Church. No surprise there. The very first New Church was temporary, made of wood in 1381 and consecrated in 1382. The Gothic stone basilica New Church structure was begun in 1384 and the inner wooden church was disassembled. The church is on the Market Square, opposite the Town Hall.

The tower, designed by Jacob van de Borch, was not started until 1396. It was slow building, finished in 1496. The tower was ill-fated. In May, 1536, a lightning strike on the tower started a blaze that nearly consumed the entire town. The city archives went up in smoke, resulting in the loss of close to all public records before 1536.

Bad luck came back again. 1654 was the year of the Delft Thunderclap. A gunpowder storage magazine in the northeast corner of town exploded. The center of the city was erased and the New Church did not escape damage. All the stained glass windows in the church disintegrated. The next magazine was situated well out of town.

In 1872 the church tower attracted lightning once again. Pierre Cuypers, architect, designed a new tower strengthened with Benteimer sandstone. Pierre also replaced the spire, making the New Church the tallest in the Netherlands after the Dom Tower in Utrecht. The tower can be climbed using no less than 356 steps.

For centuries, the New Church has been the burial place for members of the House of Orange-Nassau. The first of them, William the Silent, was entombed in a mausoleum in 1584. The latest burial – of Queen Juliana and her husband Prince Bernhard – took place in 2004. The royal family crypt is private and not open to the public.

The native of Delft painter Johannes Vermeer, christened in the New Church on October 31, 1632, had pictured this church's tower in his masterful landscape “View of Delft”. Notably, in his painting the bells are not yet seen. According to the independent Dutch art historian Kees Kaldenbach, the delivery of carillon for the New Church started in 1660 and was completed in the summer of 1661, which corresponds with the dating previously suggested, based on Vermeer's painting.

A historical chronicle says that the 36 bells installed in the New Church were "the latest piece of technology." Their music must have been a source of constant pleasure to Vermeer's ears, who would have heard them every day from his nearby studio.
Image Courtesy of Flickr and Warren LeMay.