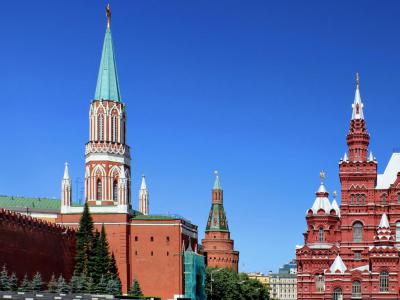 Overlooking Red Square from the north, near the State Historical Museum, is the Nikolskaya Tower (Russian: Nikolskaya Bashnya). This quadrangular structure with a through-passage on the eastern side of the Kremlin wall is yet another creation of architect Pietro Antonio Solari. Just as its sister Spasskaya, the Nikolskaya Tower was built in 1491.

The tower owes its name to the icon of St. Nicholas the Wonderworker of Mozhaysk which adorns its facade above the entrance. Back in the day, there was also the Nikolsky Greek monastery nearby, located on the adjacent Nikolskaya street.

In the 16-17th centuries the Nikolskaya served mainly as the gateway to the boyar estates and monastic buildings within the Kremlin. Protected by an iron grate, it ran through the sturdy base of the tower defended by a bastion and drawbridge. In 1612, during the fight against Polish interventionists, a Russian volunteer army led by Prince Dmitry Pozharsky and Kuzma Minin stormed through the gate to liberate the Kremlin from the enemy.

The Nikolskaya Tower had preserved its original look much longer than its counterparts. In 1780 it was first overbuilt with a short stone marquee. In 1806 an eight-faceted neo-Gothic style top and a high marquee was erected.

In 1812 a section of the tower, including the roof, was blown up by the retreating French army. It was restored in 1816-1819 by architect Ossip Bove who also added four white-stone corner turrets to the tower's base. The Nikolskaya once again suffered severe damage – from artillery fire – in October 1917, but was repaired within a year.

In 1935, the Soviet authorities removed the two-headed eagle crowning its top and installed a red steel star instead, replaced with a ruby one in 1937. Together with the star, the tower stands 70.4 metres (231 ft) high; without it — 67.1.

The original icon of Saint Nicholas, plastered over by the Soviets and considered lost, was uncovered and restored in 2010 – similarly to that on the Spasskaya Tower. The grand opening and consecration of the icon by Patriarch Kirill took place on November 4, 2010, the Day of National Unity, commemorating the events of 1612.
Image by Marcin Konsek / Wikimedia Commons / CC BY-SA 4.0 on Wikimedia under Creative Commons License.
Sight description based on wikipedia