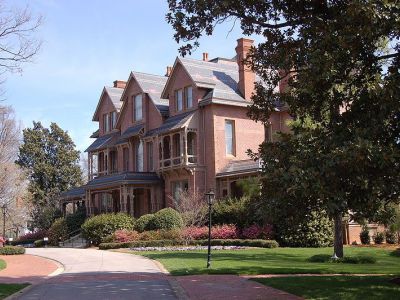 The North Carolina Executive Mansion is the official residence of the Governor of North Carolina and his or her family. Building began in the year 1883 and it was designed by noted architects Samuel Sloan and A.G. Bauer. It is an example of Queen Anne style architecture. The bricks for the house were made from Wake County clay and molded by prison labor. Many of these bricks, particularly in the sidewalks surrounding the house, still bear the inscribed names of the men who made them.

Since its initial construction in 1882, few major changes have been made to the building's exterior. Porches on the north and east sides have been enclosed to expand kitchen and security facilities. During her tenure as first lady, Jeanelle C. Moore (wife of Dan K. Moore) began a campaign for public awareness of the mansion's historic and cultural significance. In 1970, the mansion was listed in the National Register of Historic Places.
Image Courtesy of Wikimedia and Jmturner.
Sight description based on Wikipedia.