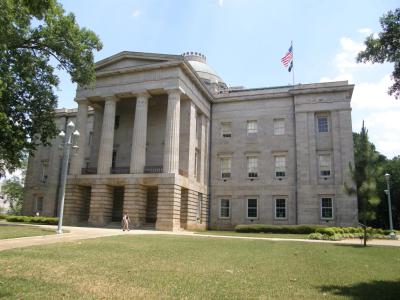 The North Carolina State Capitol is the former seat of the legislature of the U.S. state of North Carolina which housed all of the state's government until 1888. The Supreme Court and State Library moved into a separate building in 1888, and the General Assembly moved into the State Legislative Building in 1963. Today, the governor and their immediate staff occupy offices on the first floor of the Capitol.

The building was built following the destruction by fire of the first North Carolina State House in 1831, and today houses the offices of the Governor of North Carolina. It is located on Union Square at One East Edenton Street in Raleigh. The cornerstone of the Greek Revival building was laid with Masonic honors by the Grand Master of North Carolina Masons Simmons Jones Baker on July 4, 1833. Construction was completed in 1840.

The Capitol remains largely unaltered from its 1840 state. Only three rooms have been significantly altered through remodeling: the two committee rooms in the east and west wings of the second floor, which were divided horizontally to provide space for restrooms, and the office in the east wing of the first floor, part of which had to be cut away to permit space for an elevator to be installed in 1951. The Capitol was declared a National Historic Landmark in 1973.
Image Courtesy of Wikimedia and W Edward Callis III.
Sight description based on Wikipedia.