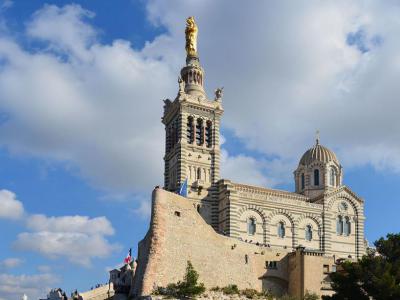 Notre-Dame de la Garde is an ornate Neo-Byzantine church which is situated at the highest natural point in Marseille, a 532 feet limestone outcrop on the south side of the Old Port and it is the site of a popular annual pilgrimage every Assumption Day.

Built by architect Henri-Jacques Espérandieu, the basilica was consecrated on 5 June 1864. It replaced a church of the same name built in 1214 and reconstructed in the 15th century. The basilica was built on the foundations of a 16th-century fort constructed by Francis I of France to resist the 1536 siege of the city by Emperor Charles V.

The basilica is made up of two parts: a lower church, or crypt, dug out of the rock and in the Romanesque style, and an upper church of Neo-Byzantine style decorated with mosaics. A square bell-tower of 135 feet is surmounted by a belfry of 42 feet which itself supports a monumental, 27 feet tall statue of the Madonna and Child made out of copper gilded with gold leaf. The stone used for the construction of the basilica was discovered to be sensitive to atmospheric corrosion. Extensive restoration took place from 2001 to 2008. This included work on the mosaics, damaged by candle smoke, and also by the impact of bullets during the Liberation of France at the end of World War II.
Image Courtesy of Wikimedia and Clément Bardot.
Sight description based on Wikipedia.