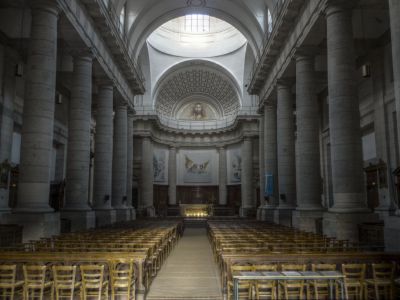 Like so many churches in Lyon, Notre Dame de Saint Vincent was once part of a monastery. Its interior reflects the simple tastes of the monks who once prayed here.

The church was built for the Augustinian monks who settled in the area in 1319. It was mostly rebuilt between 1759 and 1789 to replace their ancient chapel, which was falling into ruin. They named the church St Louis in honor of the crown prince who donated funds to the building.

During the Revolution it was first used as a warehouse and then as a hospital annex. The army took over the rest of the monastery, which in 1831 became La Martinière College.

The church was renamed in 1863, and in 1862 the nave was enlarged and the facade was built by Franchet. In 1987 the church was destroyed by fire and was rebuilt in a 19th century style. It reopened to the local congregation in 1992.

Although the interior is rather plain, there are some lovely statues to admire, including one of St Louis and another of the Virgin by Fabisch, a statue of St Vincent by an unknown sculptor, and “The Baptême of Christ” by Dufraine.

The paintings in the choir were installed in 1996. They include “Lumière d’Emmaüs” and “L’Annonciation” by Hamelin. You will see another of his works, “Le Créateur”, on the apse’s quarter-circle vault.
Image by Alexandre.norman on Wikimedia under Creative Commons License.
Sight description based on wikipedia