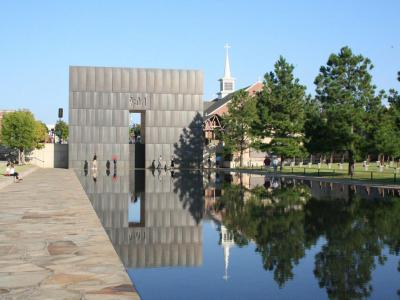 The Gates of Time are monumental twin bronze gates that frame the moment of destruction - 9:02 - and mark the formal entrances to the Outdoor Memorial. 9:01, found on the eastern gate, represents the last moments of peace, while its opposite on the western gate, 9:03, represents the first moments of recovery. Both time stamps are inscribed on the interior of the monument, facing each other and the Reflecting Pool.

The Field of Empty Chairs consists of 168 empty chairs hand-crafted from glass, bronze, and stone represent those who lost their lives, with a name etched in the glass base of each. They sit on the site where the Murrah Building once stood. The chairs represent the empty chairs at the dinner tables of the victims' families. The Memorial has an average of 350,000 visitors per year.
Image by Daniel Mayer on Wikimedia under Creative Commons License.
Sight description based on wikipedia