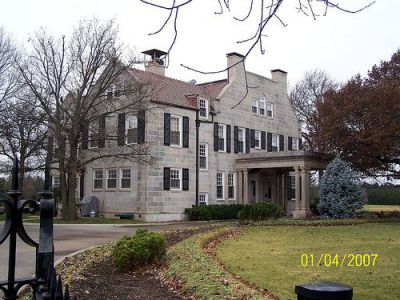 The Oklahoma Governor's Mansion is the official residence of the Governor of Oklahoma and is located at 820 NE 23rd Street. The Mansion was completed in 1928, one year after construction began. Built by the Oklahoma City architectural company Layton, Hicks and Forsyth,the 14,000-square-foot (1,300 m2) Mansion is of Dutch-Colonial style. Carthage limestone was used so the exterior of the Mansion would complement the Oklahoma State Capitol.

Over the years, the Mansion's 19 rooms on three floors have been reduced to 12 to increase living space. The rooms include a library, parlor, dining room, grand ballroom, kitchen, sun room and five bedrooms. The governor and family live in the five rooms on the second floor. All major furnishings of the floor were donated to the Governor by Oklahomans. However, as property of the state, they will remain with the Mansion for future Governors. Governor Henry S. Johnston was the first governor to live in the Mansion. However, due to his impeachment he lived there only three months. Governor William H. Murray was the first governor to reside a complete term in the mansion.