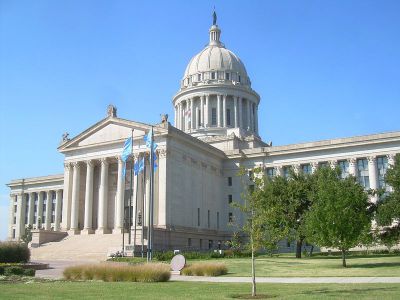 The Oklahoma State Capitol is the building that houses the Oklahoma Legislature, and the meeting place of the Oklahoma Supreme Court. It is located along Lincoln Boulevard in Oklahoma City. The present structure includes a dome that was completed during 2002. The state capitol campus is famous for its oil wells and remains the only state capitol grounds in the United States with active oil rigs. The capitol building is directly atop the Oklahoma City Oil Field.

The Oklahoma State Capitol is composed primarily of white limestone and Oklahoma pink granite. However, the building's dome is made of steel-reinforced concrete and reinforced plaster casts. In the Rotunda is displayed Chickasaw artist Mike Larsen's mural Flight of Spirit, honoring the Five Moons, notable 20th-century Native American ballerinas from Oklahoma. The west wing of the capitol houses the Oklahoma House of Representatives chamber and offices. The east wing houses the Oklahoma Senate chamber and offices. The Oklahoma Supreme Court and ceremonial office of the governor are located on the second floor. Elected state officials such as the state auditor and inspector, state treasurer, and state attorney general have offices on the first floor. The building also contains a museum, a cafeteria, and a barber shop. Several large paintings by Wayne Cooper are on display in the building. Many of them depict the early heritage and oil history of the state.
Image by Caleb Long on Wikimedia under Creative Commons License.
Sight description based on wikipedia