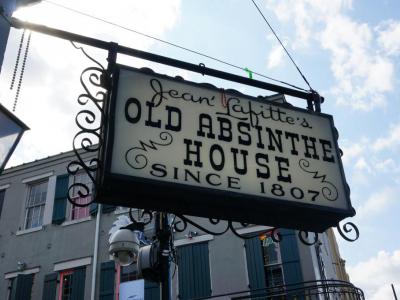 The two-centuries-old original bar from the Old Absinthe House was returned to its 240 Bourbon Street home in early 2004, and maintains its decrepit vibe, in the good old NOLA way. There are autograph registers on display, one signed by Billy Joel, and one ancient one with signatures such as "I.P. Freely" in spidery fountain pen. This place was frequented by Oscar Wilde, Walt Whitman, Ernest Hemingway and Frank Sinatra - some of the decor looks unchanged since those days. Thousands of business cards pinned to the wall serve as interesting wallpaper, and you can bring your own.

The ritual goes like this: sugar cube on the slotted spoon, cold water 'dripped' over the ice cube, melting the sugar and causing the green liquor to louche into an opaque opalescent white. This is where the "green fairy" comes into play, as you see the green absinthe changing before your eyes, creating what might appear to be a fairy swirling in your glass. The bartender will probably lit the sugar cube on fire, which is always exciting.