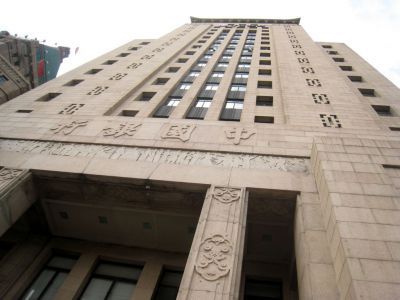 The Old Bank of China Building is one of the highest structures on the Bund. Its stunted appearance is because the owner of the neighbouring building, Victor Sassoon insisted that no other structure in Shanghai could be higher than his.

The Old Bank of China Building was built on the site of an old German Club. It was once the headquarters of the Bank of China. Today, it houses the bank’s Shanghai branch. The site was purchased in 1930 and the design was formulated jointly by Shanghai based firm Palmer and Turner and the chief architect of the bank, Lu Quianshou. The local Dao Kee construction company built the structure in 18 months after the laying of the foundation stone in 1936.

Political upheavals in the city resulted in the Bank of China moving into the building in 1946, ten years after its completion. The structure has a 50,000 square meter floor space. It has 17 floors, two of which are underground. The building has a traditional Chinese style and is built of smooth Jinshan stones. The old Bank of China building is unique because it was the first Chinese owned and built structure on the Bund where all other buildings were constructed by foreign nations.
Image by Alan Levine on Wikimedia under Creative Commons License.