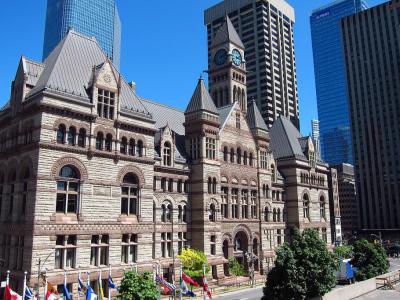 Located on the corner of Queen and Bay Street is one of the city’s architectural marvels, the Old City Hall. Grand in its demeanor and elegant in its stance, the Old City Hall was once the crowning jewel of the budding city of Toronto.

It is no secret that a lot of pain, effort, time and not to forget money went into the making of this building. By the end of 1880, the city of Toronto had expanded beyond the range of the existent municipal authority. So another building was commissioned for construction which would act as a courthouse along with being the City Hall. Prominent Toronto-based architect, Edward James Lennox, was bestowed with responsibility of constructing the New City Hall. With high expectations from his designs, it took Lennox three years to come up with an acceptable project!

The construction started no sooner. It is believed that work on the City Hall began in 1889 and took 10 years to be finished. The end result was surely well worth the wait. A magnificent City Hall, built to perfection in Romanesque Revival architecture, more accurately known as Richardsonian Romanesque architecture, boasts a 300 feet Big Ben that weighs 5,443 kg.

Why You Should Visit:
While the exterior is magnificent for its old charm and clock tower, there are still some interior details to see and appreciate – from the grand staircase with stained glass window, depicting Canadian history, to the various murals and statues...

Tip:
Make sure to visit the small "lake" close by, as many of the pictures you might know from Toronto are taken from this place while facing the "TORONTO" sign.
Image by Larry Koester on Wikimedia under Creative Commons License.
Sight description based on wikipedia