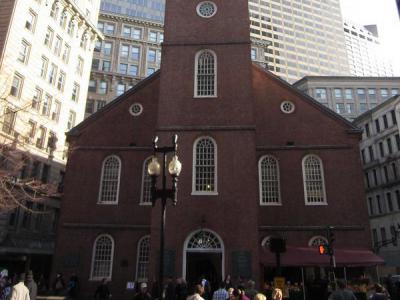 Old North Church (officially, Christ Church in the City of Boston), at 193 Salem Street in the North End of Boston, is the oldest active church in the city and a National Historic Landmark. Built in 1723, it was inspired by the works of Christopher Wren, the British architect who was responsible for rebuilding London after the Great Fire.

A seminal location in American history, this is where the "One if by land, and two if by sea" lanterns shone, and from where Paul Revere's ride signaled the coming invasion of British soldiers into the city and marked the outbreak of the American Revolutionary War. Individual visitors may wish to go inside this red brick church, the oldest in Boston, to hear more about the role of the church on that famous night in April 1775, learn about the church's history, and actually climb the stairs in the steeple (additional fee).

More recent history is reflected in a most unusual War Memorial for American soldiers who had lost their lives in the Iraq and Afghanistan wars (or the so-called "wars on terror"). Dog tags for each soldier who had lost his life had been hung on a chain in 15 rows, acting as wind chimes when the breezes blow across the church grounds. In addition, a small bronze wreath of poppies was set on a pedestal placed in a rock garden in front of the dog tags to commemorate soldiers who also had fought for the British and the Commonwealth forces.

Tip:
Inside the church is a bust of George Washington, which the Marquis de Lafayette reportedly remarked as the best likeness of him he'd ever seen.