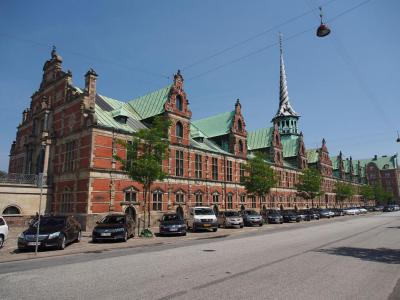 Constructed by one of Copenhagen's greatest builders and architects, King Christian IV, the Old Stock Exchange stands as a testimony to the city's wealth, having been specially built to impress foreign as well as Danish merchants arriving from the sea. Like many others in the 17th century, the eye-catching red-brick structure was inspired by the Dutch Renaissance; its low facade, stretching out along the water side, reads "For the profitable use of buyer and seller."

The spire is definitely interesting to see up close (or zoomed in), with four intertwined dragon tails that are topped by three crowns, symbolizing aspirations to rule a united Scandinavian empire (Denmark, Sweden and Norway), or at least be its commercial capital. According to legend, the spire also guards against enemy attacks and fires – and true enough, the Old Stock Exchange has many times been spared from damage, even as neighboring buildings have burnt to the ground.

Beyond lies the island of Christianshavn – Copenhagen's "Little Amsterdam" district, with its own distinct spire.

Tip:
For a nice overview picture, just take the elevator in the Christiansborg Palace, on the other side of the road! The inside is only accessible during Culture Night held every year in October, though be warned that queues can get quite long.
Image by Alf van Beem on Wikimedia under Creative Commons License.