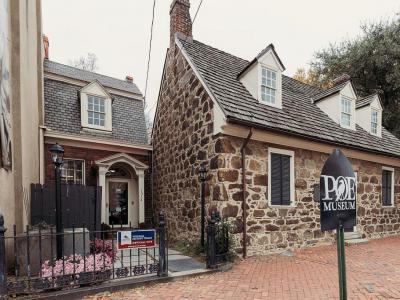 Dedicated to Edgar Allan Poe's years spent in Richmond, the Old Stone House features an extensive collection of memorabilia from the writer's time. The house was built around 1740 and holds the title of Richmond's oldest home. While the poet never lived in this actual home, it stands very near where he did live and is indicative of homes of the time. Poe's mother is buried in the St. John's Church graveyard a few blocks away. Inside the Old Stone House, you'll find furniture from Poe's home and that of his sister, Rosalie Mackenzie Poe.

Inside the other buildings, you'll find more exhibits, including several first editions and manuscripts. There is an exhibit on the mysteries surrounding Poe's death, on which there have been no fewer than 26 theories published over the years.

The movement to create a museum started in 1906 when a group of locals wanted to bring more attention to the famous local poet. The Poe Memorial Association, as they became known, worked to save various bits of Poe's existence in Richmond. They were unable to save the Souther Literary Magazine building, where he began his journalism career. Still, they were able to save bits and pieces to begin creating Poe's Enchanted Garden. The organization eventually rebranded themselves the Poe Foundation, and as their collection grew, they expanded into adjoining structures.

Fans of Poe's work won't want to miss this glimpse into his early life living and working in Richmond. The museum now houses the most comprehensive collection of Poe memorabilia in the world.

History buffs will delight in the historic Old Stone House, as well as period artifacts.

The museum exhibits are self-guided, so you can take it at your own pace. If you'd like a more in-depth experience, ask about their guided tours.