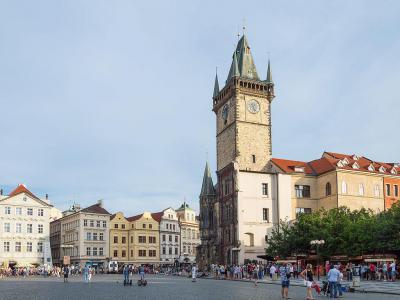 As the mainstay of the Old Town Square, the Town Hall building is one of Prague's most visited sites. Architecturally it is most unusual, emerged over the years through amalgamation of a number of smaller buildings nearby. In 1338 the councilors of the Old Town bought a large patrician house from the Volflin family and adapted it to their needs. In the following centuries the original Town Hall building had largely disappeared as a result of renovations and expansions; one external remnant of the original structure still in place is the Gothic stone portal with mouldings, on the western side.

The Old Town burghers extended the original Town Hall towards the west by buying the adjoining house, which entailed the construction of a stone tower on a square plan. The viewing tower, completed in 1364 and largely unchanged since, stands nearly 200 feet tall and was the highest structure in the city in the Middle Ages. The expansion of the building continued throughout the 15th century with the Mikeš house added to the west side in 1458 and the Council Chamber in the east wing vaulted with a net vault, supported by two pillars.

The Gothic "Cock" house was acquired in 1835 and the "Minute" house was sold to the town council for the extension of the Town Hall in 1896. The east wing and further addition to the north wing, both made in the 19th century, were destroyed in the last days of World War II, during the Prague uprising in May 1945. Today, only the surviving torso adjoining the tower gives the idea of how this part of the Old Town hall once looked. None of the architectural attempts made during the 20th century to find the right architectonic design for the expansion and reconstruction of the building came to fruition – the architectural competitions either failed to produce a winner, or the winning projects were never materialized.

Tip:
You can climb the tower at a 50% discount, from 9 am to 10 am. The early bird catches the worm, as they say.
Image by Sergey Ashmarin on Wikimedia under Creative Commons License.
Sight description based on wikipedia