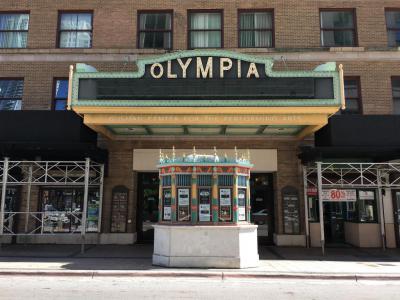 The Olympia Theater began in 1927 as a venue where silent movies were screened. It was designed by well-known theater architect, John Eberson, with Moorish style exteriors and atmospheric interior design featuring red velvet seating, Moorish-inspired hand-painted moldings and arches throughout. The building was also known for its perfect acoustics, simulated night sky ceiling with drifting clouds and twinkling stars, and as the first air-conditioned theater in the South. Eventually, talking films and Vaudeville shows became major part of the Olympia program, and it continued to be one of the last theaters to stage Vaudeville performances in the U.S.

In the 1970s, the building suffered neglect until the local tycoon, Maurice Gusman, saved it, along with the adjacent office buildings, from deterioration. He gave the renovated complex to the city of Miami who then named it after Gusman in gratitude. The building underwent restoration and structural stabilization work prior to reopening as a modern and structurally safe theater.

In addition to some of the best-known Vaudeville artists, Olympia Theater has the history of hosting performances by some of the world's best-known performers, such as Elvis Presley, Luciano Pavarotti and B.B. King.

Why You Should Visit:
Hidden gem of a theater in the heart of downtown Miami dating back 100 years. Exquisite architecture and elegant decor inside and outside the auditorium. Well worth stopping and catching a concert or movie, if visiting Miami, for a little piece of local history! Highly recommended!
Image by Phillip Pessar on Flickr under Creative Commons License.