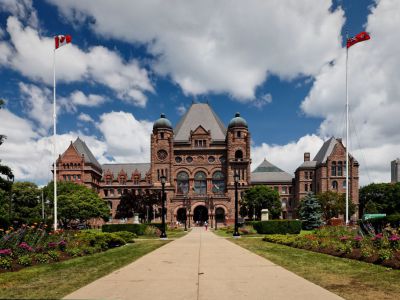 Ontario Parliament is an impressive building dating back to the late 1800s. The parliament is located within the Queen's Park and represents the Legislative Chamber of Ontario, which is the provincial legislature comprising two elements: the monarch of Canada, i.e. the British Queen represented by the Lieutenant Governor of Ontario, and the unicameral assembly, called the Legislative Assembly of Ontario. The legislature has been in place since 1867 when Ontario, then called Canada West, became one of the founding colonies of the Canadian Confederation. The building is open to guided tours and, sometimes, houses various exhibitions.

Tip:
Once you enter from the south main doors, you have the option of taking a tour, sitting in during sitting of the House (if in session), or observing some of the portraits on the west wing of former Speakers of the House – there is a wall of Women Members of Parliament near the west entrance. Special exhibits may be housed in glass cases in the east wing; there is also a gift shop.

If you're looking for coffee, there is a spot in the lower level, but better yet, try the restaurant where you can order from a set menu OR it may be the day that a full hot and cold buffet is set up!