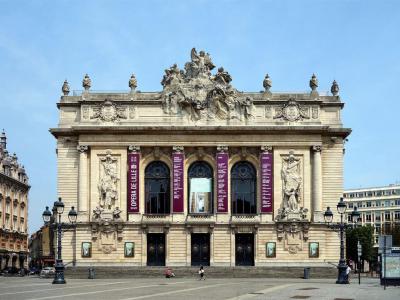 Opéra de Lille is a magnificent Neoclassical building, perfectly harmonized with the neighbouring Chamber of Commerce and Old Stock Exchange. The theatre was built from 1907 to 1913.

Following the destruction by fire of the old (1785) opera house in 1903, the architect Louis Marie Cordonnier was appointed, via competition, to build a replacement. Cordonnier's Belle Époque design features an elaborate pediment relief (created by sculptor Hippolyte Lefèbvre), and two flanking bas-relief panels by Alphonse-Amédée Cordonnier and Hector Lemaire. The interior, also very impressive, features the work by yet another prominent sculptor, Edgar-Henri Boutry.

In July 1914, during World War I, the occupying German forces stripped the still unfinished Opéra house of its furniture and equipment to furnish another local venue, the Sebastopol Theatre. After the war, the building was restored and reopened its doors in 1923 for a re-dedication as the Grand Theatre and a "première française".

In 1998, the theatre's physical condition demanded an emergency closure, during mid-season. The ensued renovations evolved into a more ambitious project to set improve the structure's functional capacities. The project was completed in 2004, in time for Lille's year as European Capital of Culture.
Image Courtesy of Wikimedia and Velvet.
Sight description based on Wikipedia.