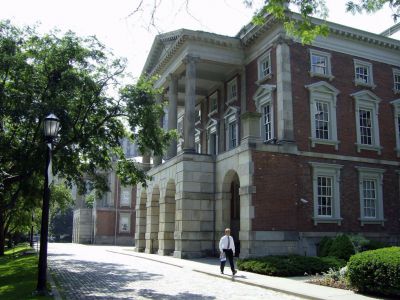 A heritage building spread over six acres in Toronto is the Osgoode Hall. This hall has garnered attention for 170 years for its legal activity, and was named Osgoode in honor of the first Chief Justice of the province, William Osgoode. Although construction began in 1829, this historic edifice was completed only 20 years later and under several architects, like John Ewart and W.W. Baldwin. The outer facade of the building retains the Italian Renaissance style, and the inside of the Hall boasts beautiful stained glass heraldic windows, intricate ceiling and elegant arched pillars. The Hall also has Palladian elements. A myth related to the iron gate is that it was originally designed to keep livestock out of the grounds.

After being troop barracks from 1838 to 1843, the Hall went through several restorations from 1844 to 1891. Until relocation of the faculty of York University in 1969, the Osgoode Hall was the home of the Law School of the University, the Osgoode Hall Law School. In honor of Ontario lawyers and law students who died in action during the First World War, a memorial was sculpted by Frances Norma Loring in 1928 and added to the Library of the Hall. In 1979, it was designated a National Historic Site of Canada.

Connected through a tunnel in the north is the courthouse, at 361 University Avenue. Currently, the Osgoode hall houses the Law Society of Upper Canada, Superior Court of Justice and Ontario Court of Appeal.
Image by Mikerussell on Wikimedia under Creative Commons License.
Sight description based on wikipedia