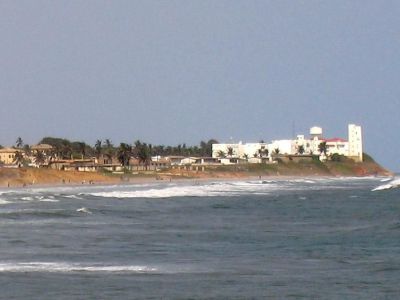 Osu Castle, also known as Fort Christiansborg is a castle on the coast of the Atlantic Ocean's Gulf of Guinea.The first substantial fort was built by the Danish in the 1660s, though the castle has changed hands between Denmark, Portugal, the Akwamu, the British, and finally post-Independence Ghana, and was rebuilt numerous times.

For most of the castle's history it has been the seat of government in Ghana with some interruptions. Osu Castle remains the seat of government in Ghana, employing 2,100 workers. The present castle is made up of various extensions to the original and is thus in an unorthodox shape; additional rooms were built in order to accommodate Queen Elizabeth II's visit in 1961, one year after Ghana became a republic. Osu Castle is not open to the public, and photography of it is restricted.
Image Courtesy of Wikimedia and Stig Nygaard.
Sight description based on Wikipedia.

Want to visit this sight? Check out these Self-Guided Walking Tours in Accra. Alternatively, you can download the mobile app "GPSmyCity: Walks in 1K+ Cities" from iTunes App Store or Google Play. The app turns your mobile device to a personal tour guide and it works offline, so no data plan is needed when traveling abroad.

Accra, the capital of Ghana, sitting on the Gulf of Guinea coast in West Africa, is a charming city renowned for its golden sand beaches and bustling nightlife. Wandering along its coastline, enjoying the Atlantic breeze, you will find alongside many entertainment venues a number of historic sites as well. The most prominent of them, undoubtedly, is the Kwame Nkrumah Memorial Park commemorating...  view more