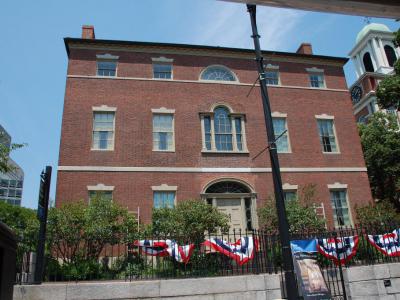 The First Harrison Gray Otis House in Boston is a National Historic Landmark, located next to the Old West Church. Built in 1795–96, this house was the first of three properties designed by noted American architect, Charles Bulfinch, for Massachusetts politician and Federalist lawyer, Harrison Gray Otis. It is notable as one of the earliest three-story brick houses that came to represent the Federal style of architecture, and its interiors show the influence of Robert Adam.

Simplest of the three houses designed by Bulfinch for Otis, its design is said to be inspired by a William Bingham house that Bulfinch saw in 1789 in Philadelphia, which in turn was derived from a house in London. The building is three stories tall, five bays wide, with elegant string courses. Today's graceful entrance was added after 1801. Above it is a fine Palladian window, and above that a lunette. The third floor is very short; ceilings are just over six feet tall.

The house was purchased in 1916 by the Society for the Preservation of New England Antiquities (now Historic New England) for use as its headquarters. It was originally located about 40 feet forward of its present location, but was moved in the 1920s after it was threatened by the widening of Cambridge Street. The original cellar was lost during this move. The house is now connected to a group of row houses on Lynde Street, which serve as office and program space for Historic New England. The house underwent a careful restoration in 1960, attending to the brilliantly colored wallpapers, carpeting, and high-style furnishings, based on meticulous historical and scientific research led by Abbott Lowell Cummings. It is open year-round for tours for those interested in learning about the family life in the Federal era in the U.S.A. and the later history of the house, when it served as a clinic and a middle-class boarding home.
Image by Julie on Flickr under Creative Commons License.
Sight description based on wikipedia