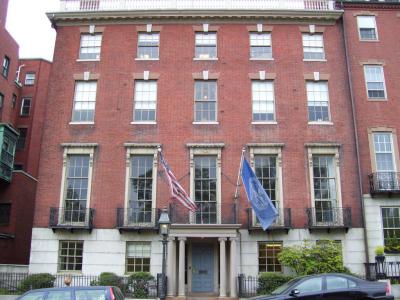 Its four stories are organized into five bays. The center entrance has a small, rectangular portico with delicate pairs of Ionic fluted columns. The modest ground floor, now faced in stone, originally had the recessed brick arches typical of Bulfinch houses. When built, the house was freestanding, surrounded by the Boston Common and English gardens.

Today, the building is the home of the American Meteorological Society.
Image by Swampyank on Wikimedia under Creative Commons License.
Sight description based on wikipedia