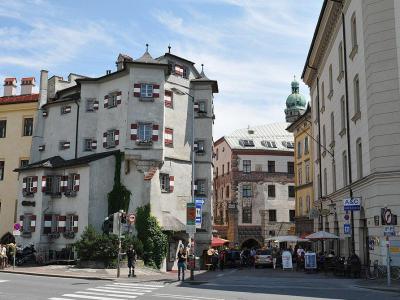 The Ottoburg is a late Gothic residential tower at the entrance to the old town of the city of Innsbruck. One building was mentioned in a document in 1476. In 1913 the building was adapted for use as a restaurant.

Ottoburg is one of the most famous and popular restaurants in town, as well as a historical landmark with its own story. Ottoburg was initially built as a part of the Innsbruck-Castle (11th or 12th century) and consequently many important people have lived here: the two sons of the Empire Maximilian I, Phillip from Spain, and Claudi f. Medici. Ottoburg also offers fabulous views on the river, mountains, and the Golden Dachl.

The building was rebuilt in 1494/1495 and expanded in 1542. The four- to five-storey polygonal residential tower with a striking corner over massive corbels was built on a corner above the city wall and connected to the inner gate, which was demolished in 1790. A third was added to the original two upper floors in 1775, and the gable roof also dates from this time . The facade is structured with projections and recesses. The 90 red-white-red wooden shutters are characteristic. Both towards the Inn and on Herzog-Friedrich-Straße there are porches from the 19th and 20th centuries.

The interior of the building has been heavily renovated, with some Gothic cross and star vaults preserved.
Image Courtesy of Wikimedia and 罗布泊.
Sight description based on Wikipedia.