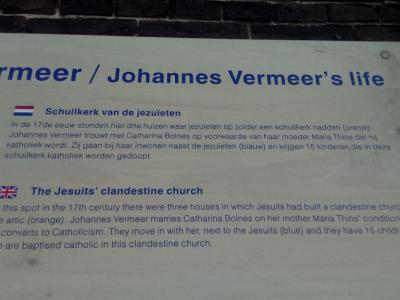 According to historical records, by December 1660 Johannes Vermeer had moved in with his mother-in-law (Maria Thins) at her place on Oude Langendijk, at the heart of Delft's Catholic district, colloquially known as the "Papenhoek" (Papists' Corner), near the Nieuwe Kerk.

What exactly prompted his move – prior to which Vermeer, most certainly, had lived in the Mechelen Inn, owned by his father, on Groote Markt (Market Place) – is unknown. It might have been due to his marriage arrangement whereby he agreed to convert to Catholicism, or perhaps was just a matter of finance. Or else, it could have been that Johannes and/or his wife Catharina Thins found Mechelen not suitable for raising children. Whatever the reason, the young family moved into Maria Thins' home when Vermeer was approximately 28 years old.

By that time he had already completed his masterpiece “View of Delft” and began experimenting with indoor subjects, like “The Milkmaid” and “Officer and Laughing Girl”. Once accustomed to his new residence/studio, Vermeer created a series of sublime paintings – so perfect in technique, that some critics described them as "pearl" ones.

In all probability, the Vermeer/Thins dwelling stood on the corner of two streets, Oude Langendijk and the narrow alley of Molenpoort (present day's Jozefstraat). The site of Vermeer's home is now occupied by the 19th-century Maria van Jesse Church. The commemorative plaque, initiated by the Dutch art historian and Vermeer expert Kees Kaldenbach, marks the former house location for those curious.
Image Courtesy of Wikimedia and Donald Trung Quoc Don.