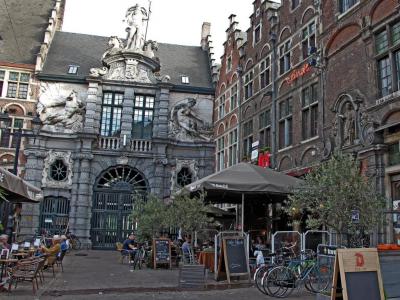 The Oude Vismijn (Fish Market) is one of the oldest marketplaces in Ghent. Initially, it was found on today's Groentenmarkt (Vegetable Market Square). In 1689 the market moved to its current location on Sint-Veerleplein complete with its signature gatehouse and permanent open-air stables.

The charming, Baroque-style gatehouse, built in 1689, was originally decorated with three statues of sea gods. Unfortunately, those were badly damaged by fire in 1872. Only the statue of Neptune, located at the top of the façade, had survived. The other two statues had to be replaced with the sculpted figures of a man and a woman, representing the rivers Scheldt and Leie respectively. Eventually, a covered market hall for meat and vegetables had been added, as part of the reconstruction, while the open market square outside continued to hold fish trade.

In anticipation of the 1913 World's Fair, the building was fitted with Neo-Gothic facades. Later in the 20th century it underwent a number of functional changes, serving, at various points, as a tyre center and a bowling hall. The vacancy was brought to an end when the city administration launched a competition to give the property a new purpose. In 2010 the building was redeveloped as a catering business.

As of March 2012, the Oude Vismijn has been a home to the Ghent Tourism Office.
Image Courtesy of Flickr and Fred Romero.
Sight description based on Wikipedia.